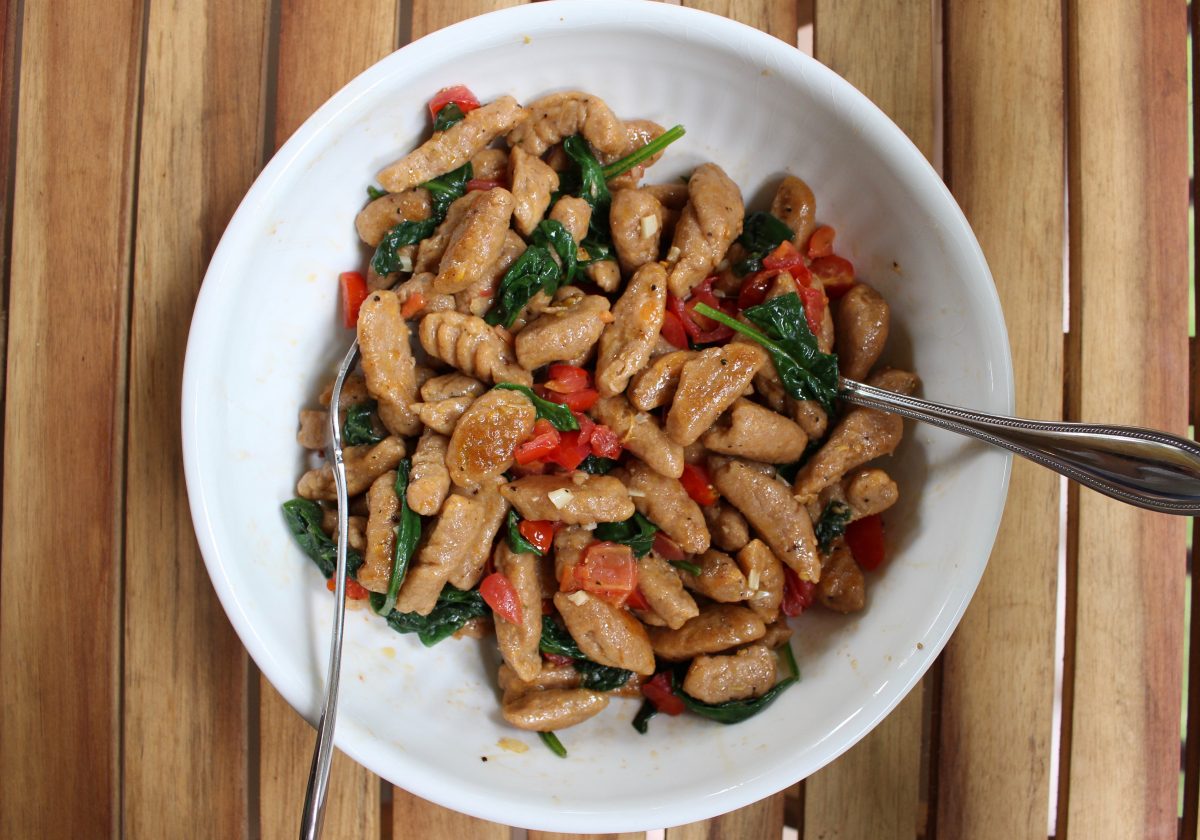 Gnocchi combines two of the greatest treasures in the carb world: potatoes and pasta. How can you go wrong when this power couple? But they can always be dressed up. Sweet Potato Gnocchi has the great taste of traditional gnocchi with all the benefits of sweet potato. Next Sunday night put away the meatballs and sausage, just this once, and try Sweet Potato Gnocchi.

Boil two potatoes in a medium sauce pan until both potatoes are soft. Allow the potatoes to cool, and remove the skins. Mash the potatoes and set them aside.

Scoop two cups of flour on to a clean surface and make a well in the the middle.

Crack one egg into the well and gently beat with a fork.

Slowly pull flour into the egg and continue until the two are thoroughly mixed (the dough will still be very dry at this point).

Continue to knead until the mixture isn’t sticky anymore.

Roll the dough into long tubes, about a 1/2 inch thick. Cut 1/2 inch dough pieces and roll with a fork or with your hands.

Remember to continue to add flour so that the dough doesn’t stick!

Fill a medium sauce pan with water and bring to a boil.

Place a small batch of dough pieces into boiling water for about three minutes, or until they float to the top. Do the same with the rest of the pieces of dough. Once the gnocchi is cooked remove from the water and place in a bowl.

In a sauce pan, cook two cloves of garlic in olive oil. Cut a handful of grape tomatoes into fourths, add to the cooked garlic. Throw two handfuls of spinach into the olive oil and sauté. Season with salt and pepper, and pour over the gnocchi. Drizzle a little extra olive oil on the gnocchi and mix all together. 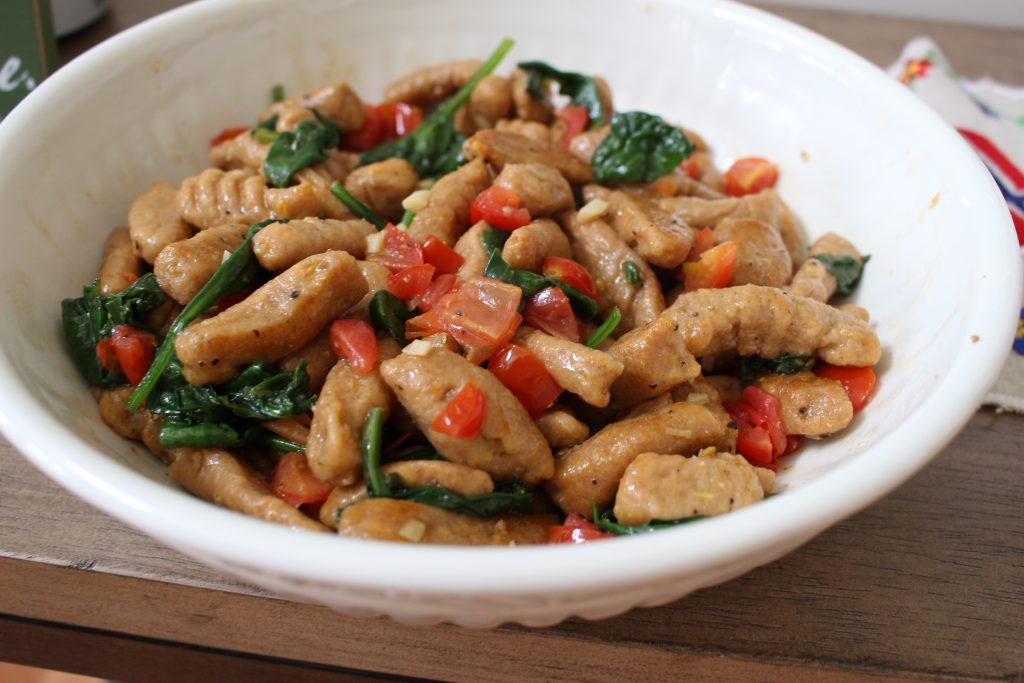 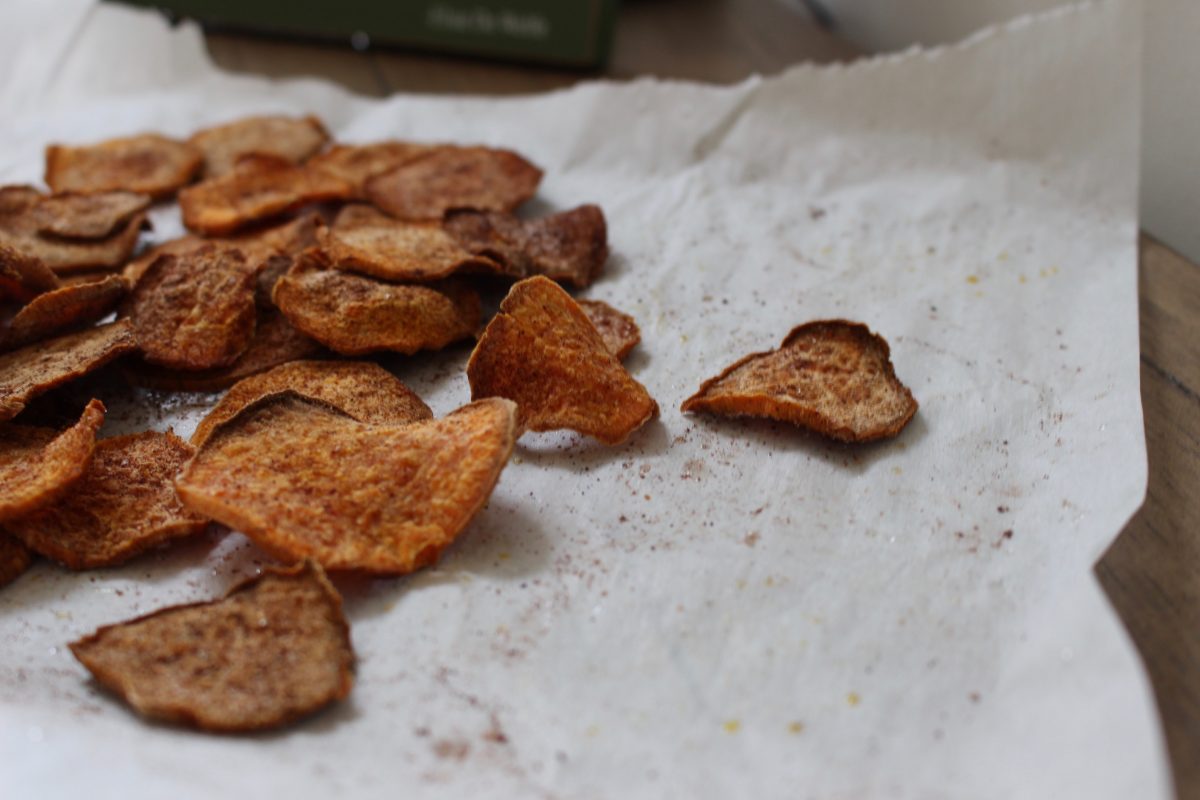 Sweet potatoes remind me of two things, Thanksgiving, and pie. The sweet taste, and orange color make these the friendliest of all potatoes. Not only do they make you feel like you’re eating dessert for dinner, they also are filled with essential vitamins. Sweet potatoes are pretty much the cooler older brother to white potatoes. They have a great tan, and know whats good for you. You can never go wrong with a sweet potato, or these sweet potato chips.

Preheat the oven to 250 degrees.

The easiest way to slice the potato is with a mandolin, or slice side on a cheese grater, but you can definitely hand slice them in a pinch. Just make sure to slice them very thin for the best results.

Place the potato slices in a single layer on a metal baking sheet. Do not use parchment paper with these chips, they wont crisp up all the way.

Mix together the salt and cinnamon, and sprinkle over the potato slices.

Bake for an hour, turning them over at the half way point.

Once the chips are browned and crispy, remove them from the oven.

Don’t panic if your chips aren’t completely crisp yet, once they are completely cooled they will become super crispy.

*You’re house will smell delicious after baking them! 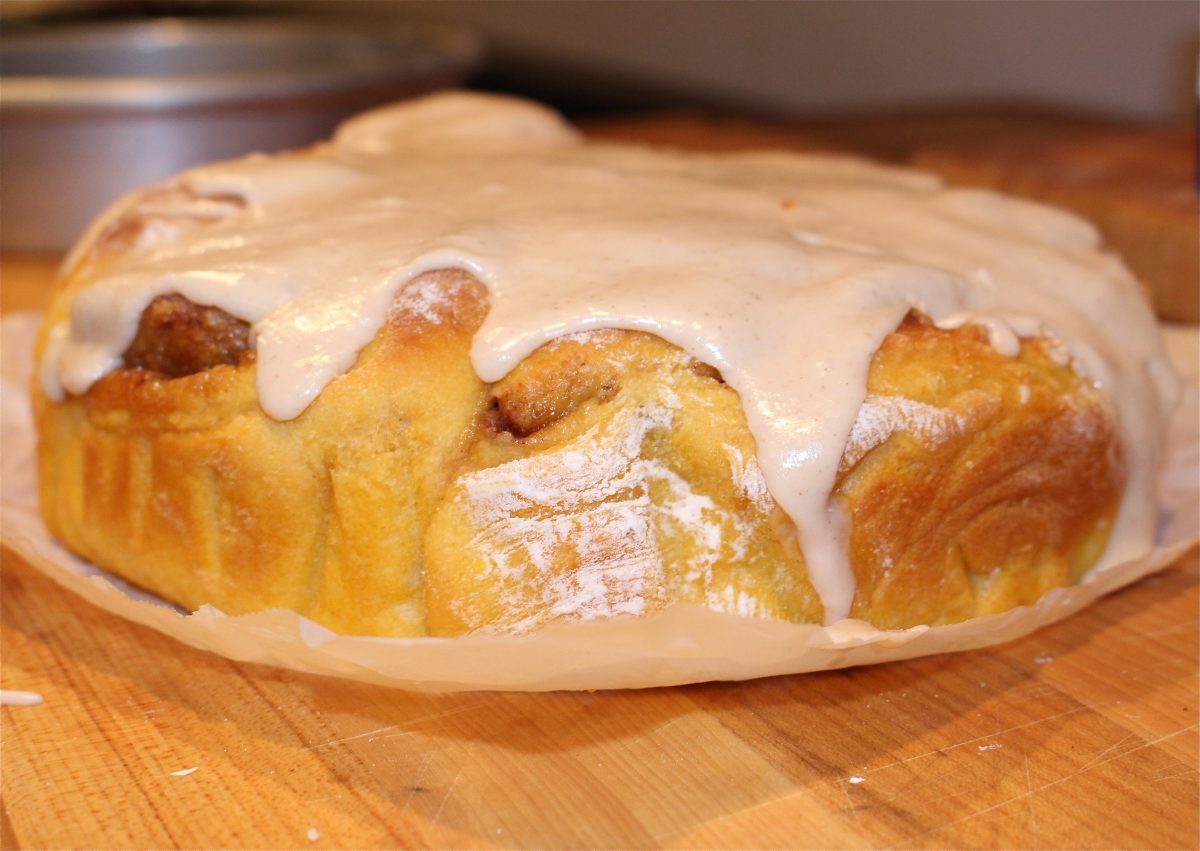 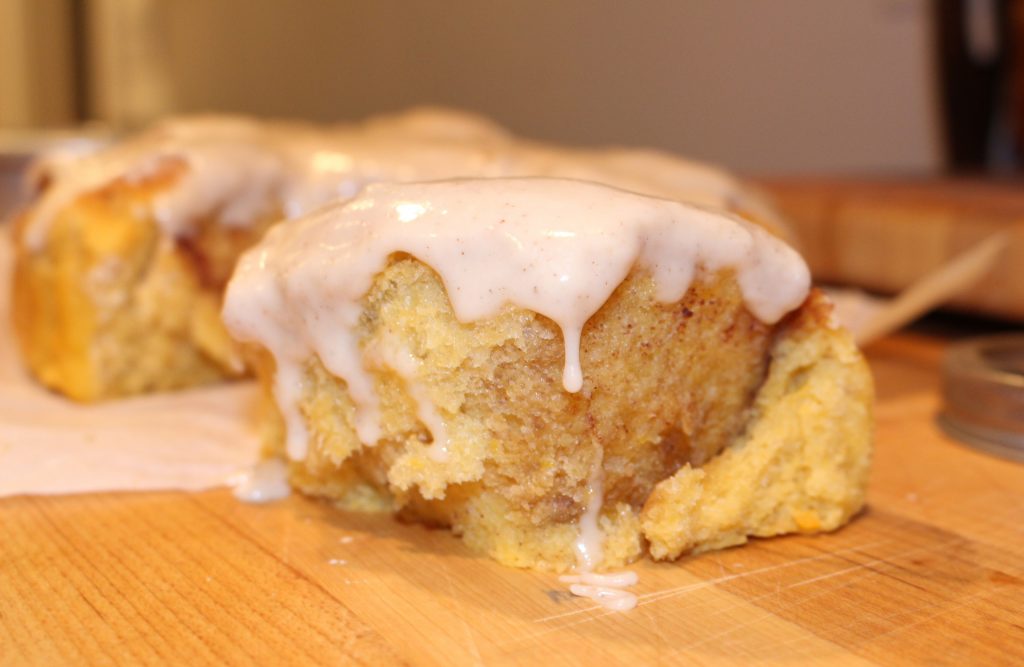 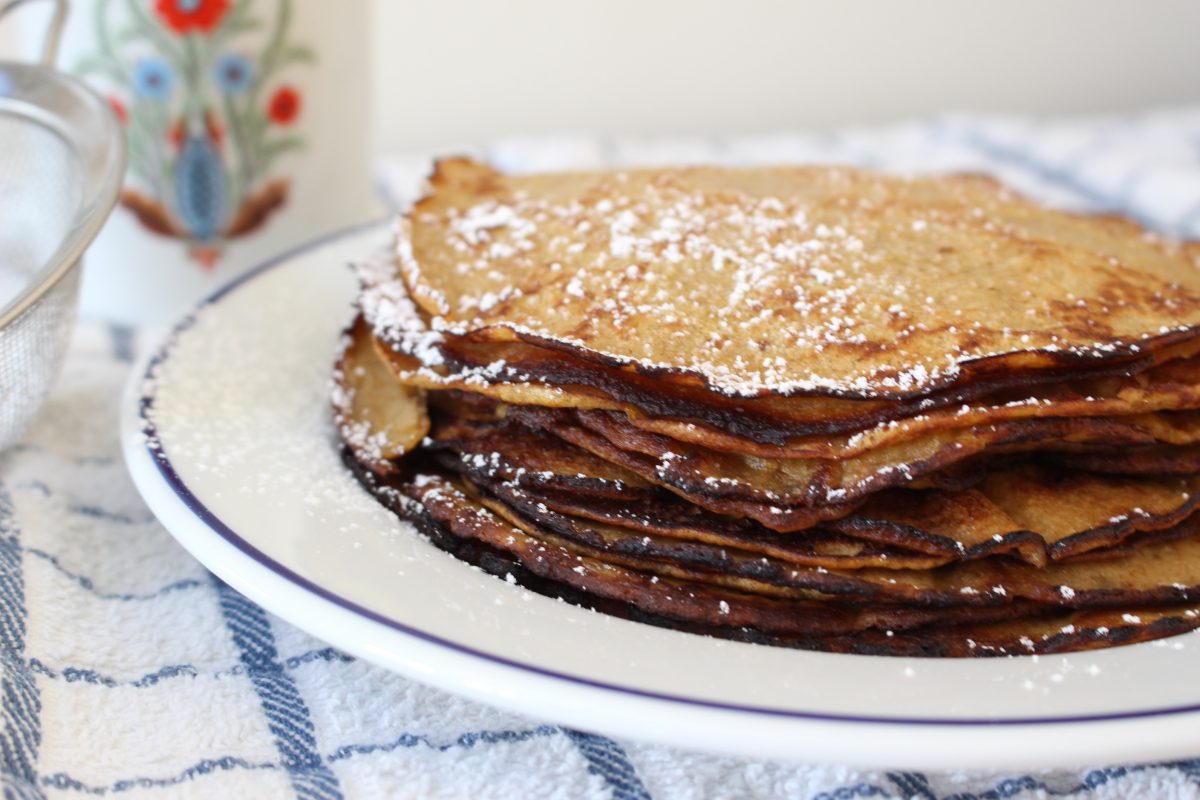 Fall is in the air, everywhere I look around! The weather is starting to get cooler, and all the pumpkin recipes are being pulled out of storage. But wait-there’s a new kid in town…Sweet Potato Crepes! Just when you thought fall couldn’t get any better.

Preheat the oven to 400 degrees. Bake a sweet potato for about an hour, or until it is completely soft.

Once the sweet potato has completely cooled, place in a large mixing bowl and add almond milk, eggs, and coconut oil. Thoroughly mix the ingredients together until the mixture is completely smooth.

Whisk in brown sugar, cinnamon, salt, and flour. Once all the ingredients have been added, and the batter is smooth, place the bowl in the refrigerator for about 15 minutes.

In a medium skillet heat up some coconut oil. When the pan is hot, pour a ladle full of batter onto the pan. Once the edges of the crepes begin to brown, it’s time to turn the crepe over. Allow the other side of the crepe to cook and then remove it from the heat.

Top the crepes with fruit, sugar, or syrup. If you’re feeling really sassy, try Nutella, you won’t regret it.